Bordering Dashoguz Region on the east, Lebap Region hosts the Amu Darya River’s flow through Turkmenistan and sees the start point of the 1500-kilometer long Karakum Canal. Traveling along the Amu Darya eastwards, fields of grain and cotton, as well as rice and fruits, dominate the landscape, until bumping into the foothills of the Kugitang Mountains at the far eastern tip of the country, where the long Turkmen-Uzbek border touches on Afghanistan. Along the riverine oases several remains of medieval monuments continue  to remind us of the importance of this route for trade caravans in the region. Today, Turkmenabad – the capital of the region, situated at the banks of the Amu Darya – remains a crucial transport hub, and offers an entry point into Uzbekistan, directly leading to Bukhara. Despite the long drive to the Kugitang Mountains, travelers visit this beautiful area out of interest in geology, bird watching, hiking, but of course also to see the famous Dinosaur Plateau.

Daya Hatyn represents the remains of a fortified caravanserai (aka Ribat of Takhiriya) located at the Amu Darya River, on the caravan route from Amul to Khorezm. Due to its location in a border area, the site is currently off-limits to visitors.

It functioned as elite traders'  inn from the X to XVII centuries. The caravanserai is considered the most perfectly preserved among elite inns that survived in Turkmenistan, and its architecture is an outstanding example of craftsmanship of the masters of the Northern Khorasan architectural school.

Amul is the ancient and medieval site at the outskirts of the modern Turkmenabat, at the banks of the Amu Darya River, thriving particularly as a crucial transport hub for three main Silk Road caravan routes.

Destroyed in 1220 by Mongolian armies, the town revived  in the XV c. as Charjui. The town plan of that period survived practically till 60-ies of the XX c. Remains of a medieval citadel or ark, on a 13 m high platform, the main kala or shakhristan which is itself on a raised platform of 20 m high, and a rabat can be observed. 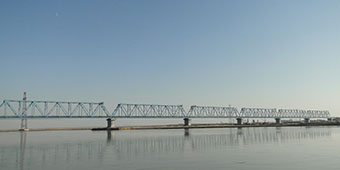 During ancient and medieval times the Amu Darya River – then known as Oxus - played a key part in the life of the population as the basis of agriculture and the main transport and trade artery in Middle Asia.

Development of many “twin towns” occurred in locations where the river could easily be crossed. Large settlements were usually situated on the left bank of Amudarya, while small advanced posts - on its right bank. These include Amul and Farap (then Bityk), and Zemm and Kerkichi. 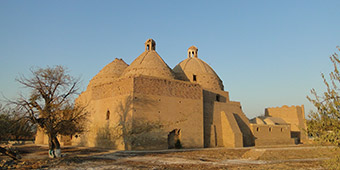 Astana-baba (medieval Maimarg) was a settlement on the old caravan route from Balkh to Zemm and Amul. It is located near the town of Atamyrat (old name: Kerki) at the banks of the Amu Darya River.

The Astana Baba construction ensemble consists of several parts, of which its oldest - the mosque and peshtak - refer to the XII century. The nearby Alamberdar mausoleum dates back to the early XI c. and can be considered as one of the earliest monuments of the XI century in Central Asia which gives us a notion of the evolution of mausoleums from centric-domed type to portal ones. 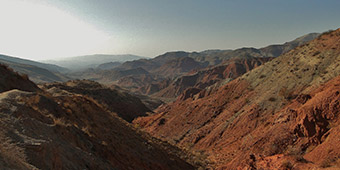 Kugitang is located at a strenuous 7 to 8 hour’s drive southeast from Turkmenabad. It is known for its famous Dinosaur Plateau, its lush valleys, steep gorges, karts caves, lakes, springs and waterfalls.

Whereas the Karlyuk karst cave complex is closed for visitors, most other sites, such as the dinosaur foot prints, the Umbar Dere canyon, the Koyten Lake, and Kainar Baba hydrogen sulphate spring are freely accessible. Only a basic lodge in Koyten village provides visitors with accommodation. 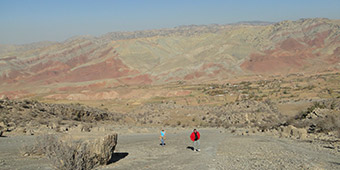 The plateau is located in the Kugitang Mountains, and hosts the imprints of more than 400 footsteps of dinosaurs on a steep limestone slope. The largest has a diameter of 80 centimeters.

The footprints were left on the bottom of a shallow lake. When the lake dried up, the footprints baked in the sun. Later, a volcanic eruption sealed them in lava. The giant dinosaurs were accompanied by smaller ones whose footprints are similar to a human foot. 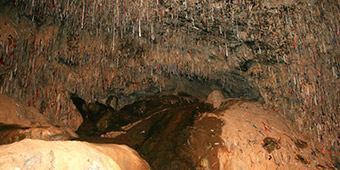 The Cave of the Forty Girls is one of the most revered pilgrim shrines in Turkmenistan. It is located at the end of a narrow gorge in the Kugitang Mountains and easily accessible on foot.

The ceiling of the cavern is covered entirely with pieces of wishing-cloths, that pilgrims have flung up there with the help of chunks of mud. Legend says that the cave brought protection to a group of girls chased by local bandits.